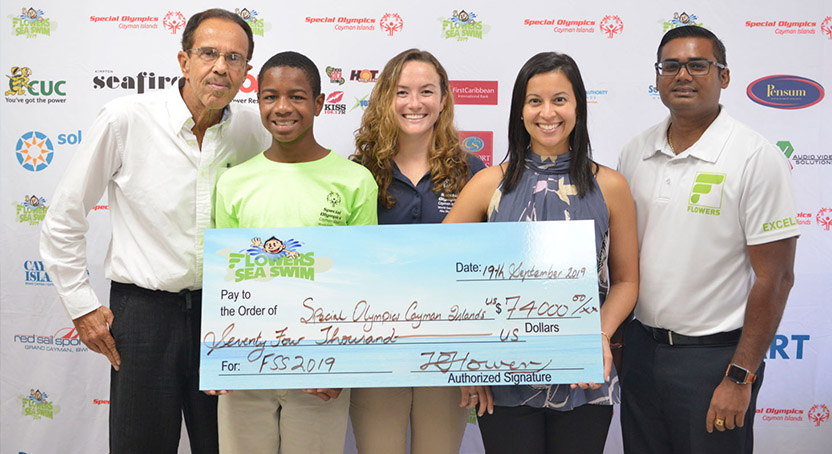 Two Cayman institutions came together on Friday, when the proprietors of the Flowers Sea Swim presented a cheque for $74,000

The funding, which is meant to pay for the Cayman delegation’s trip to the Special Olympics World Games in Abu Dhabi from earlier this year, will also go to future programmes and events.

Dara Flowers Burke, a director at the Flowers Group, said Friday that the Special Olympics is a cause near and dear to her family. Flowers Burke also said that the community wanted to recognise Penny McDowall, a longtime swim coach and special needs advocate who passed away late last year.

“It’s such a wonderful organisation and we’re so thrilled to contribute in some small way to their success and helping their athletes,” she said shortly after the cheque presentation.

“One of the other reasons is Ms. Penny McDowall was such a wonderful part of the Flowers Sea Swim and the community in general in terms of volunteerism and charity. Everyone was so devastated to have lost her, so we wanted to pay homage to a charity we knew was so special and near and dear to her heart.”

He was accompanied by swim coach Jessica McDowall, the daughter of Penny McDowall, and Antoinette Johnson, a member of the board for Special Olympics Cayman Islands and the head of the delegation for the trip to Abu Dhabi. The funding, said Johnson, will be crucial for Cayman’s Special Olympics athletes.

“That’s a real long distance and a really expensive trip,” she said of Abu Dhabi.

“These funds will go a long way toward helping us reach those commitments. Anything that’s left over is used for the local programme. We have training in eight sports throughout the year. This will allow us to run the national programme and prepare for the next world games. It will also allow our athletes to take part in regional invitational events so that they can get some other experience not just in the World Games.”

“We’re just so, so thankful that Mr. Frankie and the Flowers family appreciates Special Olympics,” added McDowall. “We really appreciate them for their contributions. It’s been overwhelming, the amount of support we’ve had for my mom and for the athletes. Thank you very much.”

The next edition of the sea swim – a one-mile swim along Cayman’s famed Seven Mile Beach – will occur in June 2020, and Flowers Burke said community involvement is a key factor in making it happen.

“Thank you to everyone,” said Flowers Burke. “It really is a community effort. The Flowers Sea Swim would not be possible without all of our wonderful volunteers, our swimmers, our Special Olympians and our incredible sponsors. … We have so many people who make this possible.

“We’re just thrilled to be able to put the event on every year and have such wonderful support from the Cayman community. We hope to do it for many, many years to come.”